If A Scab Scabs In A Scab Does It Really Scab? – By @Mr_Shankly

If A Scab Scabs In A Scab Does It Really Scab?

I couldn’t really see the point in philosophy at uni.

As far as I could see, it was no more than hungover students flinging half-baked ideas at each other about things that might hypothetically happen. And with no wrong answers, it was a free-for-all.

But a few years into The Real World, there’re a few principles that help deal with the pressures of modern life that I thought I’d share with you (mainly to justify to my own ego that my £27k worth of degree wasn’t completely worthless). Which brings me to…

Stoiciscm asks us to accept misfortune as a fact of life, and indifference as a way to deal with it every day.

The Stoics ask us to champion actions over words, and to let go of our ego.

Most of what we feel we need to share online is nothing but an instinctual drive from our ego, which is begging for some sort of consolation about itself.

It doesn’t have to be this way.

We need to realise most of our anxieties are about wanting to know about the latest news, or being the first to comment on a given topic, and this ultimately depletes our energy and rarely give as many results as actually doing something about it.

Stick that angry tweet in your drafts and go and canvas door to door; delete the flame emoji on your pal’s bikini pic and go for a beer with them instead.

2. Sharing is a blessing and a burden

We spend more time than we’d like to admit on an algorithmically-organised feed because we had a little time to kill (i.e the opportunity), so we wanted to just go for a couple of minutes (i.e the motivation), and of course we had a phone and mobile data connection at our disposal (i.e the means).

In Status Anxiety, one of Alain de Botton’s essential books for the modern age, he argues that abundant options might actually lead us to feel we never have enough.

If we can share anything, anywhere, then this tends to create a dynamic where the more we share, the more we want to share, in an endless dopamine-induced addictive loop.

So the more we share the less marginal gains we get by each thing we share, because, like any addictive drug, no hit is as strong as the first one.

‘Technology is a great servant but a lousy master.’

3. You can set your own pace

Eastern philosophy is big on balance and flow.

From Zen Buddhism to Taoism, it’s all about respecting the natural flow of things and learning to go with it, while also keeping a profound sense of composure and self-control.

This dichotomy between speed and stillness is of utmost importance to make sense of what’s around us:

It’s a strong representation of what it means to be at one with our thoughts without feeling the need to profess them then and there.

Instead of giving in to our impulsive desires, we need to channel that energy into another breathing exercise or gathering more information before reaching a conclusion.

It might sound a bit too naive or passive when so much of the world seems to be wrong these days, but the truth is that franticness, panic and rash decisions rarely take us somewhere good, no matter how worthwhile they might feel at the time.

We feel a lot of drivers to share things on social media.

A cute dog on the street, a funny pub sign, a gorgeous sunset by the lake, the food you just ordered at the street market. It’s difficult because the world has a lot of interesting things to share, so we feel obliged to share. And if we didn’t, we’d probably feel anxious because we wouldn’t know what to do instead.

The existentialist movement, which has been around since the mid-1940s suggests we challenge this relationship.

According to existentialism, to be authentic is to have full agency over our decisions, and to decide with intention at all times.

Jean-Paul Sartre and Simone de Beauvoir came up with this line of thinking under a rather different context (the Nazi occupation in France), but as an idea this stuck and is as relevant today as it was 80 years ago.

To be free to choose our own way means that anything goes, and therefore we must find meaning in things, whatever shape they take. They suggested that life ultimately has no meaning because that meaning is up for us to create. And that creative act never stops, it’s ever-evolving. The only wrong choice is to do nothing about it.

“All of human unhappiness comes from one single thing: not knowing how to remain at rest in a room.” – Blaise Pascal

Contrast this with the thinking of Pascal, and we face a paradoxical decision. Sartre and de Beauvoir, on the one hand, suggest we must continue creating in order to find meaning, while Pascal dictates that the source of our unhappiness comes from us not being able to stand still.

The answer might not be in trying to understand which philosopher is right, but rather what are the key dimensions in which we can apply both their ideas. These are mental exercises, and like any type of exercise, it takes a while until we stop feeling rusty when doing them.

To be anxious about our separation from our devices is normal, but only because it’s a type of hangover that we must learn to control in order to avoid relapsing.

Like any rehab, it gets worse before it gets better.

“Our pride increases proportionately to the faults we overcome.” – La Rochefoucauld

Another way to think about this is to reject an obsession with connectivity and instead pursue a bigger sense of empathy. All our social media apps excel at connecting us to more people, more information, more things to do, but that doesn’t always translate to us stepping outside of our own world to understand someone else’s.

In fact, you could argue the opposite happens, because when we get used to having everything tailored to us, we become the heroes of that story. But the world doesn’t know we’re the hero of the story, and most likely it doesn’t care. And often, we get all this information and feeling of “doing” stuff that we forget to properly understand how it all feels.

“Sometimes things are as simple as they seem.
It’s as much about instinct as it is about intellect
And if you feel it, it’s alive.”
Kate Tempest

By stepping out of this vortex, we might be able to realise that the world is far bigger than our perfectly tailored Facebook feed, and that instead there’s far more richness from discovery than relevance.

It’s the difference between only seeing the journalists you follow on Twitter and having an unexpected conversation with someone on the train because of the book you were reading.

These small moments matter because they’re not tailored to our supposed interests. And they’re something you feel but can’t quite put to words, which is brilliant.

If you feel it, it’s alive.

All of this is a work in progress, driven by daily rituals, small actions and frequent mistakes.

But they do imply a choice in what we’re proud of having thought, felt and done.

And that, I would now say to my 19 year old self sighing his way through another seminar on Phenomenology, is the real point of philosophy: to help us think wiser, but also act wiser.

Philosophy is what you do.

You can take the students out of SCA but.. By @Laura_Amelia_

The Hottest Day Of The Year – By @TarunChandy 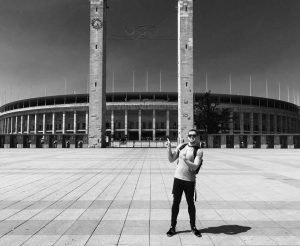