If in doubt, wear holographic jeans

Do you know what the biggest killer of creativity is? I thought I did. I was convinced that negativity from loved ones, peers and bystanders was killing my creativity.

Here are a couple of statements I used as excuses for my stunted creativity:

“You’re not made to be creative, honey, you’d be better off in Account Management”

“Remember that we’re the experts, you’re not here to be creative”

“You’re not confident enough in your creativity”

I bought into what these people said and, to be honest, I almost gave up. For a while I allowed these comments to overpower my drive and any encouragement that had come from elsewhere. But even when I reminded myself that I knew what I wanted to achieve and that I was capable of more so I shouldn’t, couldn’t and wouldn’t let these statements get to me, I still felt like something was holding me back. I just couldn’t put my finger on what it was.

About six months ago I read somewhere that the main killer of creativity is self-doubt. At this point, I realised that it was me who was crippling my creativity and I had spent some time in denial. I had been using these statements as scapegoats when really my own doubts were preventing me from progressing on my path to becoming a creative. Of course, I then vowed that I’d never let my doubts, or anyone else’s, get in the way of my creativity and, naturally, I then lived happily, creatively ever after…

In actual fact, I felt empowered for around 24 hours before my self-doubt began to cripple me again and I’ve been battling against it ever since. To tell you the truth, self-doubt almost stopped me from applying to SCA again. The prospect of a second rejection wasn’t tempting and, at this stage, I felt certain that this would be the result, so what was the point?

Around spring time I was mid-battle with my self-doubt when my mum sent me a motivational story (cringe I know):

‘Neil Gaiman on Imposter Syndrome, which we all suffer from:

“… Some years ago, I was lucky enough invited to a gathering of great and good people: artists and scientists, writers and discoverers of things. And I felt that at any moment they would realise that I didn’t qualify to be there, among these people who had really done things.

On my second or third night there, I was standing at the back of the hall, while a musical entertainment happened, and I started talking to a very nice, polite, elderly gentleman about several things, including our shared first name. And then he pointed to the hall of people, and said words to the effect of, “I just look at all these people, and I think, what the heck am I doing here? They’ve just made amazing things. I just went where I was sent.”

And I said, “Yes. But you were the first man on the moon. I think that counts for something.”

And I felt a bit better. Because if Neil Armstrong felt like an imposter, maybe everyone did. Maybe there weren’t any grown-ups, only people who had worked hard and also got lucky and were slightly out of their depth, all of us doing the best job we could, which is all we can really hope for.” ‘

Reading this was my tipping point. I was standing on the edge of a cliff wondering whether to jump or slope off home for a nice cup of tea and a nap; and I jumped. Hurtling towards the possibility of a second failure, diverting myself from obstacles as best I could with a one-minute street dance routine, a five-day rap career and some holographic jeans; I had given my self-doubt the elbow and finally found the confidence to pursue my creative aspirations. And I landed… a place at SCA.

Surely now I would be confident in my creativity. I wouldn’t have got a place at the best ad school in the world otherwise, would I?

Attending the SCA party was the next hurdle. As I entered the party, I was immediately overwhelmed and hugely intimidated. I was surrounded by so many talented creatives: mentors, tutors, alumni old and new. The scholarship winning entries were exceptional and I was in awe of my fellow students. Unfortunately, this also meant that self-doubt crept in once again, causing me to panic and question myself. Was this a mistake? Should I really be here?

And then I reminded myself about Gaiman’s story and considered that this party could be much like his. Every other future SCA student could be feeling the same thing as me. This was confirmed by Becky’s – in my opinion comforting – SCAB on imposter syndrome. Gaiman was right! I wasn’t the only one feeling out of place at the party; there were probably a lot of ‘imposters’ there.

I also thought back to something Marc said in his lecture to the penguins on my selection day. To paraphrase, he explained that the best thing you can do is surround yourself with as many brilliant people as possible, better still those who are more brilliant than you. So, even if your peers are more brilliant, the opportunity to be surrounded by them at SCA can only be a good thing. This thought coupled with extraordinary warmth and encouragement from the graduating penguins, and perhaps a little booze, meant that I left the party feeling super-positive.

So… what exactly am I doing to prepare for SCA? Judging by the tone of this post, picking myself apart a bit (but I hear this will happen when we arrive, so perhaps this is good practice). But also reminding myself that places at SCA are like gold dust and time spent giving self-doubt attention is time wasted when there’s a lot of being excited and getting prepared to do. There’s a little Neil in all of us, so self-doubt can do one! We each got a place at SCA for a reason and I, for one, can’t wait to meet everyone and explore why we were chosen.

Now, where are my lucky holographic jeans…

Secrets of the Universe – By @MrBenGolding 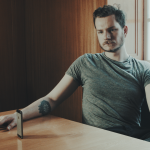 80% of success is showing up – By @RomanLapacz