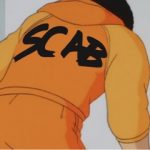 Over the past few weeks, I have been trying (at the behest of Marc) to think of ways to alter my behaviour and thought processes to better prepare myself for SCA. It’s not an easy task. Much of what he has asked me to do involves a level of introspection I’m not usually accustomed to, and so progress on the deeper stuff (like meditation and finding my “Why?”) is slow. However, up until yesterday there was another aspect of my preparation I had completely neglected, one that may have a more profound and long-lasting effect on my future career:

I remember I had a chat with a former creative at a London agency, and she told me that if I was lucky enough to get a placement, I should do whatever it takes to get noticed. Even, she said, if that meant wearing a purple spandex suit and sticking a peacock feather up my arse. At the time, I laughed at the absurdity of her comment, however she did not. With a straight face she then said, “Seriously, do whatever it takes. The worst thing you can be is forgettable.”

And you know what? I get where she’s coming from!

Ultimately advertising is the game of being noticed, and although people might say that an aspiring creative should be remembered only for their stellar work, isn’t it also true that to be successful in this industry the first thing you must advertise is yourself? I mean, look at it from a client’s perspective. Say you were the brand manager of Desperadoes, and you wanted a fresh, zany campaign that would appeal to the 18-25 age bracket. You go to your first meeting with the agency and in walks their creative team.

Would you prefer A:

Two people in grey suits that look like they’ve been sucking on a lemon and a lime respectively for the past three weeks.

A copywriter dressed like Darth Vader in a tutu, and an art director that looks like she’s run blindfolded through Liberace’s walk-in wardrobe?

I know what I’d prefer. I’d want the weirdos. Because if they put even half as much effort into my campaign as they have into their outfits, then I’ll probably get what I’m looking for.

Obviously in the real world, a client’s choice of creative (if offered at all), is rarely this extreme, and creatives that do dress like a cross between Cruella de Vil and Prince, are tolerated at best.

On reflection, I think that the creative I talked to was getting at something else entirely when she told me to wear a purple spandex suit. And it’s a piece of advice that is particularly pertinent to young creatives just starting their careers. What she was saying, was that didn’t matter what I wore. The only important thing is that you make a favourable impression, and that how you do it is up to you. She was saying, that if I do get that placement I always wanted, I shouldn’t ever rest on my laurels, or think that I’d made it. I should act as if I was still applying for the job and do whatever it takes to convince my employers that taking me on placement was a great decision.

So, I guess the sartorial panic is over. I don’t need a wardrobe overhaul (mores the pity, I could really use one), and what I really need to do is treat the work as the most important thing.

If only it were as easy as wearing a purple spandex suit and a peacock feather up your arse.

Can’t look at a screen anymore. – By @bellwoodart