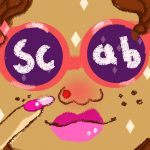 We’re talking day two of SCA now. All fears that people might bite my head off have subsided and I have yet to be late and dance in front of everyone (if you are, don’t expect bangers this will be more along the lines Yankee Doodle – Marc’s merciless in his selection).

…and I was going to tell you all about the fabulous stuff that has been concocted, talked about and done so far. But I’ve left my bloody note book behind and the thoughts I’ll try to unload in a convincing way will be far from the lusty shit I initially heard today. BOOM – apologies we did some poetry with Deana and I’m still in a rhyme sense of mind. Piecing together lines she’d written and separated we were told to rearrange them into a poem of our own. The miles of difference between each one implemented the truth that as humans we can be given something identical yet use it to create totally unique things. Rather like being given parts of a car some made windmills others made spaceships. At this point I remembered what Marc said about opportunity, that shit really is everywhere.

Sod it, I am going to try and convey what we learnt today (sorry, sorry I will cease rhyming). It will aid my memory and some of it is just too bloody good not to.

I reckon that Ben’s got life on lock down. The lessons learnt from the two hours with him were also invaluable. We talked about the brain and its two parts. The front part, the 4% minority that receives information and locks it away, he called this the human side. Then there’s 96% which is called the monkey side. This side is instinct, emotions and most importantly fear as this is so often behind our motives. But his Buddhist teachings aligned with an incredible story.

He was head of ‘tornado’ in an unspecified UK prison (I know, it’s already sounding awesome), this meant that whenever there was a prison riot he would be the madman to try and extinguish it. The go-to plan would always be to make as much noise as you possibly could, therefore hopefully tapping into the prisoner’s monkey brain by instilling fear. Now there was a prisoner, a really pissed off prisoner that was brandishing a sock with a snooker ball in and swinging it around. This man had lost all rhyme and reason, he was being dominated by the monkey. Ben outlined the hopelessness in trying to infiltrate the monkey or human side of the brain when it is already overloaded. So instead he tried to challenge the prisoner’s monkeys’ side by asking him questions like “what colour is that sock?” – “what colours the snooker ball inside it?” – this would engage his human side. With O shaped mouths we heard how as the prisoner was processing these questions his fiery anger was subsiding, like a child that has found a new interest. Finally, the last question was “and are you going to hit me with it?” to which the man said “no”.  This simple technique of asking “why” works wonders in calming either one of your overloaded sides of the brain. I feel I’ll need it this year, a good lesson learnt.

Then there was improvisation. I was up for this one, way back in the day I was convinced I’d be the next Daniel Craig and I’d sporadically leaped onto anything theatrical. Revisiting it I learnt the value improv has in starting a creative process from quite literally nothing. It is all about collaboration that must be worked upon so quickly that you don’t even realise till the end what it is you have created. A marvellous construct that proves anyone so long as they throw themselves into it, can be creative. At the start of the process the freedom that comes with just doing is the best first step. Improv is king.

Roughly 305 days till portfolio day. Like the hungry caterpillar I wanna eat every single one and I don’t see how my appetite can even dwindle.

The Internet (& The Tab Dilemma) – By @_nadiahammoud

I saved an old woman’s life. – By @MunrajSC