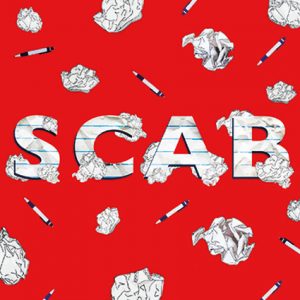 9:33 and I have twelve minutes to do a scab (and apparently I can’t swear which is fab).

Honestly, I felt like a bit of an idiot on day one, and first days are those ones that go so fast it doesn’t really matter. Although that saying “first impressions” is important – I found myself saying to people that I need a sieve to filter out all the crap I say; which isn’t what I exactly believe about myself.

Something I have taken from all of that waff, is that you have to live in every moment. Now, I’m not advising anyone to drop their trousers for the sake of living in the moment – but I felt it was necessary to prove the point for “protests as an outfit”. Of course, nudity just had to be there, alongside some other funny quotes that have stuck with me:

“Connecting my beard hair and pubic hair and playing myself as a harp” had to be a highlight.

“Your mind is your clothing”

And I’m going to somehow bring this all together to talk about where I want to go. There seemed to be a resounding appeal towards humor today, everyone decided that talking about something funny or spontaneous or attention grabbing was the way to go – and I’m totally on that wavelength.

My passion project TOAST was a resounding failure, I hated it because it didn’t turn out the way I wanted it to – but within that failure I had to recover and I had to solve the problem of presenting something that could have been utter poop (much like this scab, three minutes remaining 9:42). I’ve had a few people come up to me and say they liked it, and this isn’t me showboating, but you’ve got to practice what you preach. I told someone from supdupub (sorry spell check) that they shouldn’t apologize for something if they haven’t done anything wrong – because I could’ve thought it was the best thing in the world.

So I’m not apologizing for anything.

If you thought my nips were awkward, or that the nakedness is a bit of a stunt, that’s your problem, not mine. I’ve been thinking to myself over the past eleven minutes of rushed scab writing, and with one hundred and fifty words to finish, I want to cast back to the video of Joel that Marc showed us.

I am a bit erratic (f**k – sorry I swore it’s 9:45) and like to make people laugh, I’m not really here to be serious in terms of make your cry – I’m seriously here to make serious work and have a seriously great time – but I have always come around to making work that has ended up being (huge bunny ear marks) funny.

So I think I know what I want out of SCA this year, like how Joel knew he wanted to be headed towards NZ.

I want to make you laugh. And cry. But cry with laughter. And if I do that, then it’ll be a win for me.

Creating great ads is hard, they need to be simple. – By @LawrenceESlater