Burning my Passport (Not Really)

I always assumed the UK and US were nearly identical. I mean, both have a man running the country whose hair is the only thing worse than their ideas. I’ve had a rude awakening since I landed almost exactly three months ago. It turns out I don’t know diddly squat and I’m reminded of it every day.

We’re still mostly the same, but that’s just human nature. We are 98 percent the same. We worry about the same things, we complain about he metro/subway, and we complain that a G&T is way too expensive in bars so we just make them at home. Where I’m noticing the divide isn’t in how we function as a society, but rather all the freaking brands and weird foods you eat. It’s endless. Every day it seems I’m told to eat something I’ve never heard of, like clotted cheese. Or was it clotted cream? I can’t remember now. They both sound gross. Who wants to eat anything with “clotted” in the name? I can feel my blood shiver.

My knowledge gap of quintessentially British brands and food has left me at somewhat of a disadvantage. These last two weeks, my partner on a brief had to stop every half hour to show me some ad or tell me about some product I had never crossed paths with. I’m missing references and my red white and blue blood was practically oozing out.

Everyone knows I’m American, probably from even before I open my mouth – which doesn’t take long. There’s nothing wrong with that, but I can’t let that be what defines me. Right now, it might be a great strength, but it’s also a weakness. By not knowing what a Jaffa cake is or that pudding isn’t what I think of when I say pudding, I’m reminding people constantly of my alien status. If I want to work in Britain – which I do for at least a few years- I need to be a Brit. Know what brits know. I don’t need to talk like them, but I should understand my friend when she says she wants rice and peas (which still makes no sense to me. Peas? Why are beans called peas? They have the same amount of syllabus so you’re not shortening it. It’s just silly and confusing for no reason.) Who, after all, is going to buy products sold in an American tone of voice while in the UK unless it’s beef Jerky. It’s like Al Pacino in Heat. I have to think like Robert DeNiro to catch Robert DeNiro.

So while being American is 90 percent of what gets me laughs and without it I’d just be tall and handsome, I aim to distance myself slightly from it by learning all of Britain’s intricacies. When someone asks for a torch, I won’t spend the day looking for a tiki torch. When someone asks if I’ve seen that ad for Twinings, I’ll start by saying “Yes, I know what Twinings is.” All that being said, Tata for now!

Making Your Own Luck – By @sammcollinss 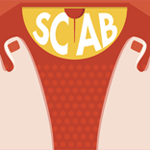