Everything is a process

This time yesterday I felt numb. Beaten down and pin-balled from one big life event to another, these past couple of weeks I have felt pummelled to the point where the mind stutters and stalls as it searches for greater meaning. It has felt hard to be creative. Yet to create has also been a saving grace.

When I was 21 I was in my second year at Edinburgh University. Having learnt how to recite and regurgitate knowledge at school, I’d won the very unexpected grades that allowed me to embark on an academic degree. It had been suggested to my parents that I complete my A-levels elsewhere so as not to bring down the high achieving schools place in the league table. It was therefore a shock to everyone that like a prize cow I regurgitated the best of everyone in my year. A year and a half later I was in hospital. Depression. I remember the week I first felt it. It felt like my mind had fallen silent. Like paint fading from a canvas into a blanket of snow. Words slipped from my brain and I felt I had absolutely nothing to say. Like a black velvet hole I went deeper and deeper into – my personality disappeared. I would later describe it as my brain having being replaced by a sock. A pointless, useless sock. Nothing worked; I felt nothing. The end of the world could have happened and I would have stared silent. That was my first time in hospital, more admissions would follow. My sister always said she thought I was creatively depressed. Unexpressed. Back then no one talked about depression and so no one understood that it was different to just feeling low. ‘Watch a funny film’ some would say, ‘that will cheer you up.’ It wasn’t understood that it was more than a sadness, it was a DISCONNECTION. Like a computer shut down. No reboot. Just blank. I hope one day that it will be called something else – it’s big, dark and ugly enough to have it’s own brand identity.

When my step-daughter was taken into the ICU over the summer with a heart condition, watching the nurses working day and night, the rest of us around her felt like we had made such trivial life choices. A painter and two filmmakers – how much of a difference were we making in the world? Yet in the following weeks I saw how much of Deya’s recovery was aided by the power of art, film and creativity, escaping the grey walls of the hospital into many magical worlds. The one thing that I believe strengthened her the most was the incredible release and connection that comes from laughing. Not only did it bring us all together as a family but that magic that comes from a moment of the joint understanding of one idea that is suddenly turned and twisted in such a surprising way that lights up your whole brain fuelled us daily. At 9 years old and now a proper comedy expert, Deya has watched every episode of Friends and Arrested Development and had some important questions to ask after Four Weddings and A Funeral.

It interests me how humans search for connection throughout their lives but we have created rules as to when and where is appropriate. When is it ok to all laugh together? Only when you’ve bought a ticket to a comedy gig and are paying for the privilege? Sitting isolated on the tube, staring at our phones, we disconnect whilst trying desperately to re connect. Yet if the same bunch of commuters in that train carriage were at a drinks event, the rules change and we are allowed to engage and chat and laugh. When a tube driver brightly jokes and lifts the whole journey home, I love to watch the struggle on peoples faces as they choose whether or not to allow themselves to connect. Then silently, for one brief moment, there it is, a quick knowing glance before returning their faces behind their shields.

Yesterday it was mental health awareness day. How far we have come to feel able to show our wounds. How far we have come that we know that when someone dies that to grieve is a necessity. Others before us weren’t so lucky. From time to time, the big D still creeps up on me, uninvited and for no good reason. Instead of looking for something outside of myself to shield me like I used to, – I now choose to ride it out, fully conscious, armour down, feeling the pain of despair that quietly comes from nothing and leaves only an echo of darkness in the void. I know that this too shall pass. Then life comes back again. And I wake. And I re connect. Creativity is the connection. The connecting of two or more things to make me renewed.

An Ode to Twyla – By @HollyISThomas 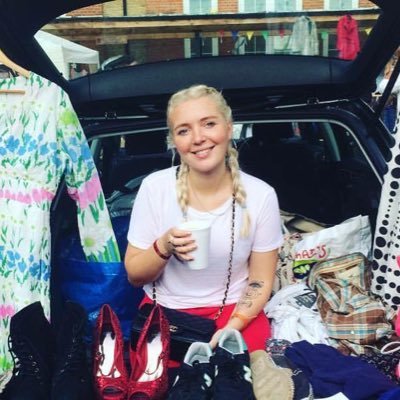 Six months gone: I am not a gimmick. @dinglebobs

Gooners made me starve. By @iamvandale