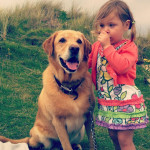 On Tuesday I had to get my dog put down.

He was a 12 year old Labrador and he was ill, but it was a shock and so this has been the saddest week I’ve had for a long time.

I’d been complaining about him recently as he’s been keeping me up at night barking to be let out. It got so annoying last week that at 4 o clock in the morning, after the 3rd wake up of the night, I kicked him up the bum as he went out the door. It was barefooted, but it was harder than it should have been. I didn’t realize he was so ill.

He was called Gruff.

I chose his name because I thought he’d grow into it. It was only when he was old enough to run off the lead, and I had to call him did I realize that shouting “Gruff” sounded like I was barking at him. By then though, it was too late, his name had stuck.

He preceded all of my children, and to them, he’s always been part of the family, they’ve had a big brother. He would play with them in the garden, be fed vegetables under the table, and sit with them when they were upset (or in trouble).

So on Tuesday lunchtime, when the vet recommended we put him to sleep as soon as possible to put him out of his pain, I felt like I’d been punched in the gut.

We called the kids school and picked them up so they could say goodbye to him. They sobbed and wailed like I’d never heard before. He didn’t have a clue what was about to happen.

The vet arrived and talked me through the procedure, and asked me to sign a consent form. I could barely grip the pen.

I sat on the floor with his head in my lap as they did what they needed to do and I felt so much guilt for the times I got cross with him, for the times I was too busy to walk him, and for kicking him up the bum last week. He was my mate and I loved him.

He shut his eyes, let out a breath, and he was gone.

They covered his body in a blanket and carried him away in silence.

Last night I went out to the garden before bed and took a piss on my own. And I wept for my old mate.