Planes shouldn’t be able to fly, but they definitely do. – By @sammcollinss Planes shouldn’t be able to fly, but they definitely do.

On a planet properly far away, an alien life-form struggles for survival. A potent cosmic dust from a passing asteroid has settled on the crust of their planet – and it’s causing mayhem. Heavily allergic to this dust and yet to have invented Clarityn, the aliens are forced out of their caves spluttering in a panicked frenzy. They frantically board makeshift spaceships fashioned from garden sheds and head spacewards (apparently not a word but should be) in search of a new home.

Many lightyears of drifting through the cosmos later, a small group of the asthmatic aliens crash land on Earth – just near enough to Area 51 for the internet to completely lose its shit.

The aliens can’t believe their luck – given the infancy of their aircraft tech they thought they’d never survive the intergalactic journey and anyone with bad hay fever knows that leaving anywhere without Clarityn could be a recipe for disaster.

The US Army are first on the scene, followed closely by NASA. Once the wreckage has been surveyed and the perimeter secured, the aliens are pulled to safety. In a secure decontaminated bunker eminent figures of the scientific community gather in amazement to question them – thankfully, they speak perfect English.

The aliens tell the world their story and are immediately lauded as heroes. They’re paraded around by the US with such excitement and pride it’s as if every founding father, sporting hero and past President has been reincarnated to play together in the Superbowl. They pose for photos with tourists in Times Square and have a joint Instagram account that quickly reaches 65m followers. They dine with world leaders and give TED talks. The area in which they landed is renamed ‘Los Alienos.’ They even go on Jimmy Kimmel.

6 months later, the uproar has simmered down for the aliens. A couple have been carted off to rehab – they couldn’t cope with the fame. But for the others, there’s one thing they can’t seem to get their many, elongated heads around – flying.

They observe manmade commercial airliners soaring through the skies with ease and precision. They see these metal behemoths circle airports and land on short strips of tarmac with nothing but a couple of gentle skids and bumps by way of drama. So in awe are they of this seemingly magical feat of engineering, they seek out an ex-pilot to get some answers.

We join them midway through their conversation with Captain McTavish – a decorated veteran of the RAF….

Alien 1:  [sipping tea through his nostril]…so let us get this straight… (their English is perfectly and surprisingly colloquial)…a giant metal tube, with two huge engines….

Alien 2: …with 500 people and ALL of their stuff for a two week break in Majorca…

Alien 1: …bundles down this bit of gravel [points at a photo of Captain McTavish on a runway] at barely over 100mph and just…

*The aliens huddle together, murmuring suspiciously*

At last, one breaks away from the group and exclaims:

At this point in the SCAB, I’d like to make an admission – none of this is actually true.

This fictional stream of what is debatably garbage, has a point. The aliens, have a point.

When I was first being taught about how planes fly in school, I was so close to understanding it – it was all based on the 4 forces:

At the time, as an annoying 14 year old that wouldn’t shut up in class, I refused to believe this could be true.

“I mean have you ever personally experienced lift!?!?” I asked.

“Have you ever been running for a bus, tilted your palms upwards and suddenly found yourself hovering over the 82?!”

No, of course you bloody haven’t. So I didn’t believe it. I just looked up at planes and thought “it’s so obviously a lie – the wings don’t even flap.”

I genuinely thought there was a worldwide government conspiracy to prevent the public understanding how air travel worked. No matter how much my Physics teacher assured me he wasn’t in on the act, I didn’t trust him. Not one bit.

Did I have any rationale for this belief? No. Was there any potential benefit to anyone perpetuating a lie like that? Of course not. Did it waste time in class and leave me feeling dissatisfied. Yes.

Although to this day I’m still sceptical of how on earth ‘lift’ actually works (@ me if you can explain), I’m resigned to the fact that it does. I’ve matured. I suppose adulthood changes everyone. But you know what? I’m much better off for it. It’s been a long journey to enlightenment, but now I’m delighted to report that I now sit on planes without a care in the world.    I’ll take a round of applause and another tiny bag of pretzels please.

At this point (and perhaps for sometime prior to this) you might be thinking, “well this has been 8-11 minutes of my time emptied in to a garage vacuum of pointlessness that I’ll never manage to be retrieve.”

…..and you’d be completely right.

I’m kidding, that would be so out of order. There are actually two morals to this story:

The way the world works is counter-intuitive in so many ways. We as humans have so many blindspots. We can’t comprehend the supermassive or the super tiny – because we evolved to deal with tigers in the savannah, not quarks or galaxies. We read people inaccurately, react to situations emotionally and cling to our beliefs and opinions like treasured possessions. We have so many inherent and unconscious biases it’s almost surprising to me that we can even congregate together in a purposeful way – socially or professionally.

These are a few things I’ve picked up from some of the reading/listening I’ve done in preparation for SCA. I think that being aware of your blindspots puts you in a great position to develop creatively and professionally and I will to the best of my ability try to keep it at the forefront of my mind during school – but I can’t promise I won’t bring up the flying thing again because come on….

MORAL TWO – if you take a sleeping pill on a long flight, just go to sleep – don’t stay up and write a SCAB instead.

Talk a Walk on the Tourist’s Side 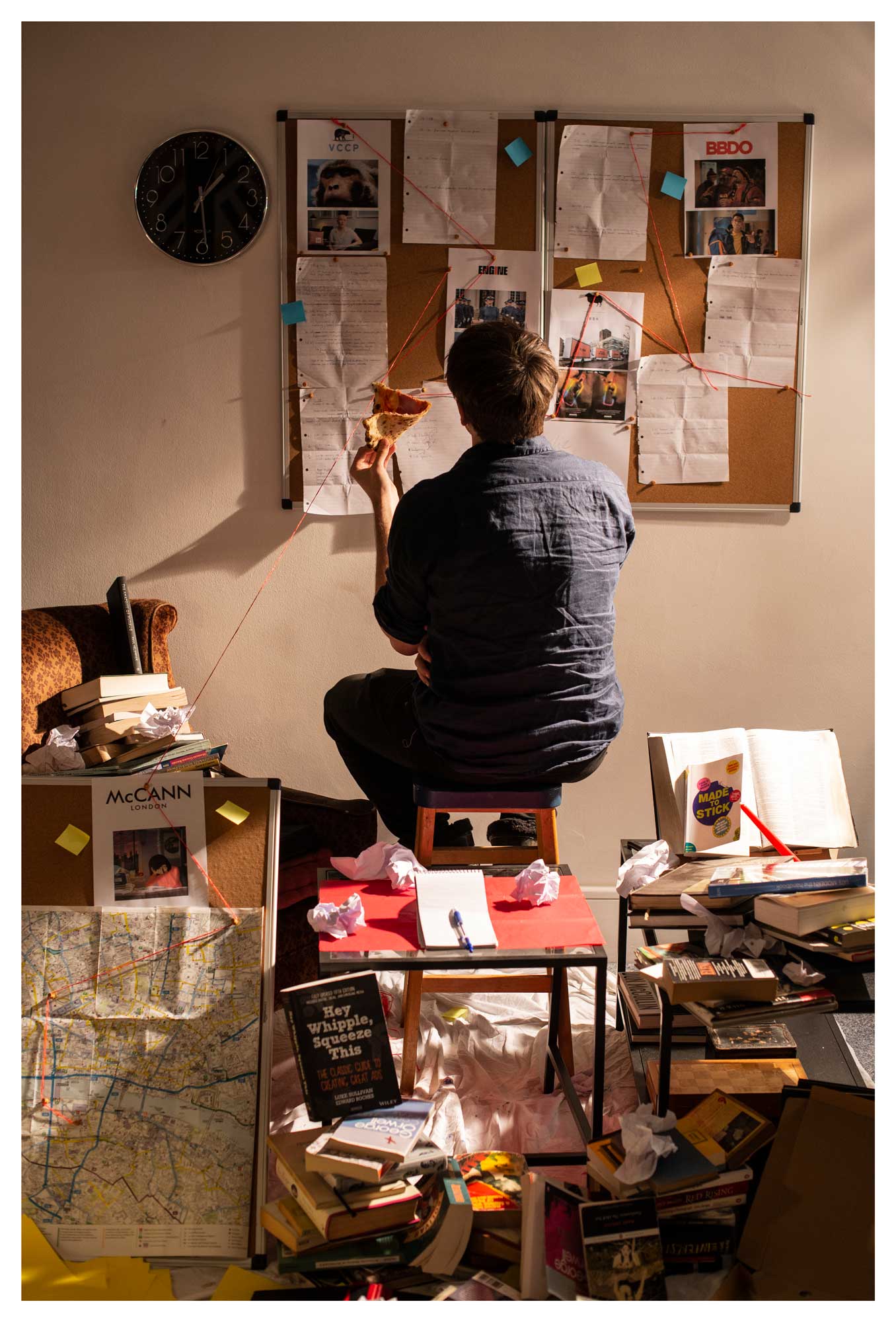