In one of the mentor’s slides, he discussed a famous quote by Pablo Picasso whom once said “good artists copy, great artists steal” and to be honest I’m not sure how comfortable I feel about this quote. As creatives surely we strive for originality or to be inspired by others? For example on the first week of the course, I spoke to a fellow student about a story I read a few months back. Recounting the story, a woman called Katie Cutler set up a fundraising page for a man named Alan Barnes who was mugged outside his home. Touched by his plight, she met the victim Alan Barnes, who is visually impaired and has been disabled since birth, was left too afraid to return to his home. Mr Barnes, 67, broke his collarbone when he was pushed to the ground.

Following reports of the attack, Katie Cutler set up the Help Alan Barnes online donation page on Go Fund Me and raised donations approached £300,000. Katie presented him with chocolates and a card, and he told her she would be a friend for life.

I also tried fundraising on Go Fund Me for a charity for poor children in India. This however never got the traction I hoped for.

The point I was demonstrating in the conversation to the fellow student was that to get into advertising, you need to actually execute your ideas rather than merely and display them on paper. You have to convey that you are capable of gaining above the line and below the line in media coverage. This would prove that you’re an individual who can raise awareness without so called big budget. I was pleased to have inspired the fellow student who actually got the desired response and accolade.

Another fellow student gave an eloquent speech in his reflection quoting Sir Winston Churchill, “never, never, never give up”. With long hours and hard work at SCA, these words have become ever present. 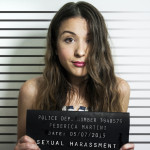 Probably the coolest job in the world – By @josieaefinlay