I’m deeply fascinated by the art of copywriting and its ability to communicate in a moving way, often very different to the capability of images. Even if I probably won’t ever be a copywriter, I enjoyed Caroline’s workshop on creative writing before the Christmas break a lot. For me, one of the most interesting exercises was when we all got a picture of something and created a story for the picture. She added a little extra to spice things up: Some rules we had to stick to. For example we couldn’t use any form of to be, we could only use negatives, only use words with one syllable and so on. These little twist showed us how changes like this influence your style of writing.

So for this SCAB I will show how little restrictions can influence the style of your writing and maybe also the emotion of the same story.

Before I set myself some rules to stick to, I went to a bookshop and chose a random picture out of a ‘Toilet Paper Magazine’- Book and made a short story for it. 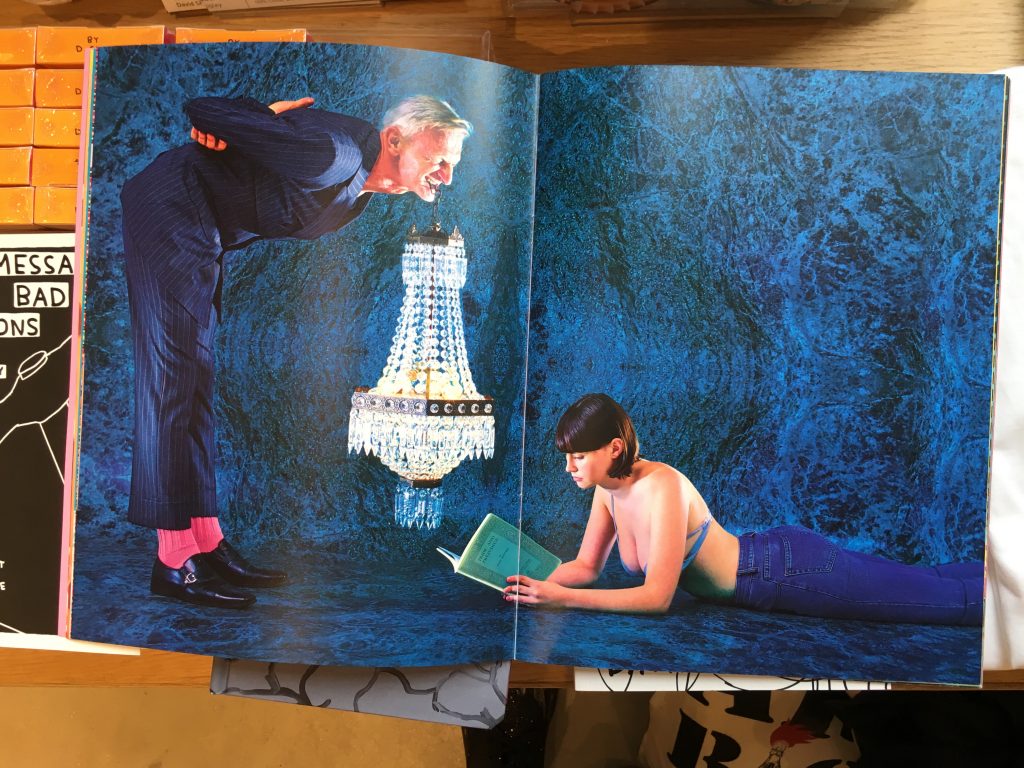 The story from a picture:

I’m looking up and stop reading for a moment. I start wondering, what have I done with my life. Since I started this job I’ve changed so much. Who would have thought that I’m enjoying evenings like this. I’m feeling comfort in this weird situation. I never had problems with the tasks others wanted me to do for them, but I’m enjoying this one way too much. I wonder what this man has gone through to have these proclivities.
I’m laying on the floor, topless, reading a novel by Kafka, about a man turning into vermin.

But this man, this rich and conservative looking old man, he is so different to what he seemed to be. Living in a mansion, it looks like he has everything, yet his deepest wishes seems to be unfulfilled.

His eyes are glazing now. He looks at me with an excitement and a vibe of being truly satisfied. Really unusual, but these are my favourite clients. All he wants to do, is watching me. Watching me, while he is holding this big old chandelier with his teeth, standing there like a big old piece of furniture. Who would have thought that the most pleasure a man can have is feeling like a bracket.

I’m not looking at the book anymore, my thoughts are also not absorbed in Kafka’s story about not being a human anymore. I didn’t enjoy myself that much in a while. Although this isn’t a normal situation and also one I’ve never been in before. I’ve never had a problem with other peoples wishes, but I’ve not enjoyed anyone as much as this one. But I’m not the one enjoying this most, this man probably haven’t had such a good time in a while. He isn’t disappointed at all. No, it looks like he has never felt as good as now. Not feeling like a human, that is the only thing not making him depressed. Not being a human, but a bracket for a big old chandelier, that’s what he’s not able to feel like, in his not too bad seemingly life.

Only use 5 words sentences:

I wonder what I’ve become. How did I get here? Laying on a dusty floor. Being looked at by him. With his bright, joyful eyes. But I’m also enjoying it. More than I should, maybe? I’ve been doing this before. But he really loves it.
Being a human is exhausting. Being an old furniture instead. That’s what makes him happy. So happy, it’s almost contagious. Why not be a bracket. Try it, be a bracket. The bracket for a chandelier. Maybe you’ll feel satisfaction too.

Only use words without the letter ‘A’ in them:

This evening is so chilled. They used to be more effort, but this one is nice. The old guy is nice. He is into something I would’ve never thought he is. He seems to be rich, living in this big house. You would think he got everything in his life. Who would’ve thought, this is the thing missing for him. Being something else. Not himself. Not even one person out of flesh. But being the mounting for

the biggest luster, this is the most impressive feeling for him. Giving me light, while I’m quoting Kafka, word by word.

Using the ABC as the beginning letters of your words:

No more commute for this guy. By @JacobDeFig