Yesterday I had the pleasure of watching Whiplash, the new film about a boy named Andrew who is striving to be a successful drummer. The film focuses on the relationship between Andrew and his teacher Terence Fletcher, the conductor of the college jazz band. It is safe to say that Terence and Marc have quite different teaching methods. I will compare what happens when our ideas are atrocious to what happens when Andrew plays out of tempo. Our ‘here’s our big idea’ moment is usually followed by awkward silence, whilst a puff of whisky flavoured E-cigarette smoke lets us know that our idea will shortly be slaughtered. Terence is more direct. Although this is useful in that Andrew received more immediate feedback, the physical and mental scarring he endures is something I can do without. I won’t ramble on too much about this film, because I would urge anyone to see it. It truly makes you think about what it means to try hard at something.Weighing up the two teaching  techniques, I think I strongly prefer Marc’s approach, given that I’d like to leave SCA with all limbs in tact. We should count ourselves very lucky. The end.

Scabbing is to writing what scamping is to drawing 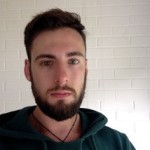 Purpose, in Bite Size – By @olov_fr

Faultiness is a Point of View by @jcxh