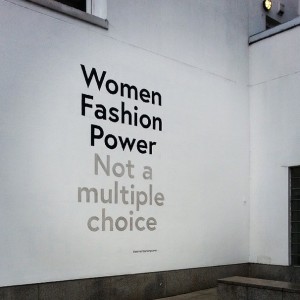 Over the weekend, I went to the Women Fashion Power exhibition at the Design Museum. The general theme of the show was to demonstrate how feminism and women’s progression in society was reflected in the evolution of fashion.

Freedom of fashion = freedom of society

Clothes – or more explicitly style – has always been important to me. It’s an outlet for expression that my otherwise quiet demeanour would not facilitate so easily. Let’s call it an unspoken language.

The thing that jarred me recently was finding out the reasons why Steve Jobs, Obama, Mark Zuckerberg  and many other powerful men around the world wore the same thing everyday. They weren’t just lazy blokes, oh no. They weren’t even creating a consistent image to minimize wardrobe malfunctions. The reason why they did this was to decrease the number of menial decisions that they had to make throughout the day, so that they could focus on more pressing things at hand; like running a major superpower and creating cutting edge technology.

Now, in no way am I comparing myself, but if we are to take examples from the direction in which we mean to go, it would appear I’m wasting a good percentage of my brain power on a technique I use to get myself up in the morning. This makes the prospect of getting out of bed even more draining than it already is on these cold mornings with a dead boiler.

Alas, I thought, perhaps this is the reason why every morning, I get into the studio feeling grumpy and in need of a second cup of tea that I would normally never drink in the same time frame if I was at home. I shouldn’t blame the commute so terribly.

What I didn’t consider when mulling over this piece of information, was that these people might also just make this decision because they couldn’t give a rat’s arse about fashion, and considering it would take more brain power than they’re willing to provide. Maybe because they’re men and their appearance isn’t as scrutinised; most likely because they’re not in an industry that would value it.

Taking a look around the advertising industry, it would appear that values are different. If the thing that starts off my creative process happens to be my wardrobe (YES it takes creativity to dress all in black and pull it off, trust me), than so be it. At least my mind can start putting together two or more things to make something bigger within a minute of me waking up.

Germans Vs. Greeks – By @LaskarisPhillip

My Little Pony – By @AroundSkadri

Advertising is just advertising. By @christinems_