Despatches from bed – By @charlesfare 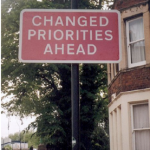 I’m in bed writing this SCAB. I’ll get up and live soon, but I’m going to relish the novelty of lying in bed on a Monday morning guilt-free for at least 30 more minutes.

Today marks the beginning of a well deserved half term. There’s still work to do – there always is – but I reckon I’ll spend Monday relishing my all too brief freedom to mooch around.

Right now I’m listening to the radio and idly browsing the internet from my phone. Later I might go for a walk or do a bit of reading. Or maybe not. Who cares really?

All I really want to do is push any and all thoughts of SCA as far out of my head as possible. Even if it’s just for 24 hours. Tomorrow I’ll scamp, write SMPs or panic about the impending doom of Term 3.

But until then, I’m taking it easy and thanking my lucky stars I’m not currently stuck on the Victoria line. Or walking up the country’s most anti-social high street. Or, worse still, staring at a wall in the studio trying to come up with a lateral way of selling tinned food.

Term 2 ended last week. That means we’ve got about 100 days or something left of SCA in total. On the increasingly rare occasions I speak to my friends or family about the time we have left, I try to explain that although the end is in sight, things are going to get harder before they get easier.

That’s one of the most frustrating things about this course, really. The fact that there’s always a steep learning curve to overcome. There are lots of things I’ve gotten better at since starting the course, but there’s so much more I’ve yet to master. If it ever gets “mastered” at all.

Getting to the point where we’re “good” at this is going to be a challenge. But none of us would be here if we didn’t like challenged.

One thing I don’t like is the constant comparisons we get to previous cohorts. Did you know they made better reflection slides than we do?

They produced better posters, covered the walls in ads and slogans. And were never ever sick at sea.

They got paying jobs not long after leaving the womb. For passion projects they painted the Sistine Chapel at the weekends and still had time to get up at 5am every morning, walk up two hills in the snow and write 50 SMPs before sunrise.

I don’t find it motivating to be told how much better than me someone I’ve never known was a year ago. I do find it a bit nostalgic though. When I was a child, my mum used to constantly nag me about cleaning my room. She’d tell me how much better my cousins were at doing their chores and tidying their rooms without being asked. It didn’t make me tidy my room more often, just made me like my cousins much less.

I can see what my mum was getting at. The same goes for the people putting similar tactics to use today. But if it didn’t work on me when I was 10, why would it work on me at 30?

Constantly being told about the Herculean abilities of creatives past and my failure to live up to the standard they’ve set makes being good feel more mythical than achievable. It demotivates and depresses me rather than uplifts and inspires.

You are a creative – By @laurenpeters123