His croutons are scattered all over the pavement.  A whole bag of the stuff, everywhere.

He squats down to check if any of them are salvable. They’re not.

Tears begin to fall down his dirty, decrepit cheeks.

Time has been tough on Harold. He could have had it all.  Once upon a time, he was a county level swimmer with five girlfriends and a wardrobe full of the trendiest Le Coq Sportif clothing that money could buy.  He was a boy full of promise, with wisdom and charisma in abundance.

But here he was, crying over soggy croutons in the midst of a midnight downpour inside a Lidl car park.

What on earth happened to Harold?

To find that out, you must go back to the summer of ’99.  For some it was a wonderful summer, but for Harold, it was a tragic one.

After another successful school year in which he got the 2nd highest grade in his class and in which he won the county 100m backstroke championship for the 4th year running, Harold decided that the summer of ’99 was the summer that he finally got a job to fund a lads holiday to Weston-Super-Mare.

Luckily for him, finding a job wasn’t too tough.  His uncle ran a candy floss stand in the city centre and was in desperate need of an extra pair of hands during peak season.  Harold’s skill set was ideal; a disarming charm for chatting up the customers and an impressive level of dexterity to run the new flossing machine – The Glengarry Glen Floss 3000.

His first few weeks on the stand flew by.  It really did.  Harold was a natural.  With Ricky Martin playing on the radio and customers complimenting his candy floss creations, Harold was in bliss.

His uncle was amazed too.  He wondered how on earth he survived without Harold in the first place.  Sales were up, satisfaction among the regulars was up – Harold had become irreplaceable.

Towards the end of July, Harold’s ability on the Glengarry Glen Floss 3000 began to surpass that even of his uncle.  His uncle had noticed this development and his feelings toward Harold began to move from amazement to a sort of fascination.

Although his uncle knew this fascination had to stop, he was struggling to control himself.  Harold was oblivious to this.  He was just there to work and to save up for his lads holiday.

On the morning of August the 13th – the uncle’s struggle to control himself was lost.

As Harold was prepping another portion of Dorset’s finest candy floss for one of the regulars, his uncle crept up on him from behind and violently grabbed him by the hair and pressed his head against the counter.

The customer dropped his candy floss immediately and sprinted away from the stand in panic.  Harold and his uncle stood alone in the stand.

Harold let out a high pitch squeal as his uncle dragged him towards the candy floss machine.

“YOU ARE AT ONE WITH THE GLENGARRY GLEN FLOSS!”

Harold’s face turned pale.  He began to wave his arms wildly and started to squeal louder and louder as his uncle began to push Harold’s head in to the machine.

“YOU ARE THE MACHINE!”

The top of Harold’s head clipped against the flosser. His hair began intertwining with the bright pink floss.

Harold felt the machine pull on his head.  He knew he was in desperate danger.

His hair got pulled further in.  He squealed again.

He had to do something….so with all the power he could muster he kicked out at his uncle and sent him to the floor.  With his uncle on the ground, Harold’s arms were free to help him yank his head out of the machine.

His uncle was slowly getting back to his feet.

His uncle got to his feet.  He began to approach him.

His uncle reached for him again.

As Harold freed himself from the machine, he immediately threw his right fist towards his uncle and clocked him right in the forehead.  His uncle’s legs weakened and he fell towards Harold.  Harold leapt out of the way and his uncle fell in to the machine.

First his head was consumed, then his neck, then his torso, then his legs, then his feet.  His uncle was being eaten up by the machine.

Harold was frozen with shock.  Had he just killed a man?

He looked down at his sweaty palms for a few seconds..…  Then he looked back up at his uncle being digested by the Glengarry Glen Floss. Then he ran.

Harold has been hiding there ever since.

He made the decision to do it in the evening after Lidl had closed for the day.  This was because he wanted to limit any chance of anyone spotting him on the way out.

He wanted to surprise his parents with something nice upon his arrival home, so he jumped up from the confectionaries aisle and picked up some chicken, caesar dressing, lettuce, and some croutons.  He distinctly remembers that his Mum was going to be making a caesar salad for supper on the day that he ran away – it was a family favourite.

Once he gathered all the ingredients and put them in a bag-for-life, he headed for the exit.  He didn’t look back.

As he left the building and walked into the car park, he was full of adrenaline.  The street lights, the oxygen, the droplets of rain – these were not just memories any more. This was how it felt to be alive.

He hopped, skipped and jumped across the first car park spaces.  He was overjoyed.

Then suddenly he tripped over a manhole and although he just about kept his balance, the bag full of food fell to the floor.

And here we are.

His croutons are scattered all over the pavement.  A whole bag of the stuff, everywhere.

He squats down to check if any of them are salvable. They’re not.

Tears begin to fall down his dirty, decrepit cheeks.

After a few seconds he wipes away the tears and stands up defiantly. 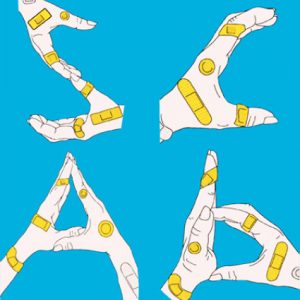