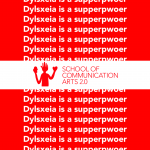 I’ll throw in the school’s name too (Gate House), it was a Christian school with a headmaster that resembled our very own iron lady. I was a fat dyslexic kid that was withdrawn because I never felt like I was progressing. They definitely made me feel some type of way.

I was first diagnosed with Dyslexia at around 11 because previous to that I had never had to prove my academic intelligence in order to further my education. However, It was pretty evident to me and my whole family that there was something missing from a young age.

You feel a bias in terms of how you’re treated, you’re continually told you don’t work hard enough but how can an 11-year-old understand hard work when they don’t understand what they’re meant to do?

Teachers have favourites and you’re very rarely one of them. However, I excelled in English literature as soon as I could use my imagination the rest of the class realised I wasn’t a buffoon. I spent every math class daydreaming, so I had infinite amounts of raw material to choose from when writing stories.

I had to go to a school called Fairly House to learn how to work when I was 12 because no schools would accept me from the age of 11 to 12. Not great for your confidence when no school will take you at the ripe age of 11 and a ½.

I remember the exams vividly, I would walk in and try and strategically place myself next to the most academic appearing person and try to copy their exams. Then the interview would come, and they would always say ‘Woah, your test score doesn’t match your emotional intelligence.’ I was like ‘Yeah, I fucking know’.

My hobbies outside of school were Boxing, Rugby and Fencing. I hated anything that the schools promoted because I am not going to help someone who doesn’t help me. However, I was surprisingly good at cross country and in secondary school I got treated a little differently once they realised they could use me to further the school’s reputation.

My family are all A-star academics, so they gave me chats when I was 11 saying the direction that my life was going meant that I may end up being a bum if I didn’t work harder. So, I started to work hard, and I developed a regimented routine of exercise and studying to learn math as well as science.

I learnt, I practiced, I passed, and I got better but the traditional school system didn’t help that process at all.

My favourite subjects in school were English Literature, History and Sports later on. Anything with a story or something I could relate to or understand, meant that I was interested.

If math had crazy characters and a sci-fi plot, I’d be Albert fucking Einstein.

However, in secondary school I started to excel after ‘the special school’. It felt like I was in rocky for like 5 years as I was getting thinner, better at academics and more confident in my own ability.

Dyslexic kids have to struggle with their own idea with intelligence and overcome judgement through believing in their own ability.

When it came to A-levels, I was at an art school doing 3 non-art subjects as once again I was not going to do what the school wanted. I actually think I danced around creativity and flirted with it but never fully committed. I studied film, philosophy and business. I was equally good at all of them.

I came to find out about SCA through dropping out of Sussex university at the ripe age of 19 and 3 months into trying philosophy.

The reason I dropped out was because of Harvard referencing which is basically the act of coming up with your own idea then searching through articles until you find a reference to an author that has already said what you’re trying to say but better and 100 years before you ever laid pen to paper.

In any case, I dropped out and got a job at Joe and Juice. I was fucking shit at it and I spent all my time daydreaming and making the wrong juices for people. Then, subsequently not charging because I felt bad.

Then I talked to my mum who has a friend in advertising, Billy Faithful who works at Engine. I emailed him a bunch of times for a week, and then he agreed for me to come into his agency.

I sat in a boardroom in Great Portland Street whilst his PA brought me endless amounts of hot chocolate until Billy was out of his meeting. He then took me to lunch which he paid for and explained what he does and what he doesn’t do. I said fuck yes, I’ll ponder daily on crisps brands and get paid a salary of a foreign exchange banker.

He said, you have a couple options he said try Watford and I said “Watford – What a shit hole, no fucking way. What’s the other one?”, he said SCA is run by a crazy man named Marc Lewis and you have to do a vodka shot on the opening day to get in.

So, I called Mumsy and told her I’m going into advertising.

The SCA has provided me with a tonne of self confidence in creativity.

Creativity was this intangible thing that people talked about before I came to the school. Now it’s all around me pushing me and the best part is I think I might be fucking good at it.

I think I’m learning strategy slowly now and things are coming together really nicely. But it’s SCA and you never know what’s one week ahead, which is fucking exciting.

Even if advertising isn’t for me, I believe that I can achieve in other fields now. But most of all I’d rather jump off a bridge than have a desk job with spreadsheets and all that crap. Fuck right off.

Your disability will not hinder your ability to do advertising, at all. However, there are snobby twats everywhere and you may be liable to a comment about spelling or grammar of the way you write.

But ideas are what the school deals with, and if you got good ones… Fuck the snobs, you’ll be fine.

My experience at SCA hasn’t been all great, a lot of it has hurt but the good kind of pain like running in the rain.

It feels all dramatic but you’re flying and you’re always going up. You’ll never work so hard, and you’ll find out more about yourself then ever before. What are you made off? What do you want? What is your journey? What’s your raw talent?

If you have suffered from any kind of prejudice in terms of learning ability from school, apply to SCA to open up a world where your dyslexia could be the difference in getting you into the best ad school in the world.

You feel behind in life? If you get into the SCA you’ll be ahead of all the snobby twats out there. That’s why we do it, to shut the critics up and get the bag (the bag) money. You’re the bag.

If you’ve been daydreaming a lot because you’re shit at school, you’re halfway there.

Dispatches from the frontline part 3 – By @MrBenGolding