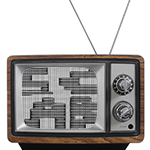 There was a period of about twenty months, give or take, where I spent over half my waking life watching TV. Granted, I was sleeping for eighteen hours a day, so ‘life’ is a generous term. But it was three hours of Adventure Time or American Football, lying in an attenuated haze on the sofa.

I don’t know if reports of TV’s death have been greatly exaggerated, or are quickly being actuated, but I know I don’t know enough to know there are a lotta dots out there for the televised taking, and the giving season of Christmas has given over to dreary, binge-inducing January.

And: the modern zeitgeist isn’t found in pew, or park, or shop, but on sofa.

So, I started watching a TV show.

Unfortunately, my TV tastes, for the most part, might make Nige proud. I like ‘English’ humour, ‘English’ drama. My faves growing up were Basil Brush, The Boosh and David Brent.

So, off a friend’s recommendation I started watching a Canadian TV show called Letterkenny.

(You can watch the opening clip here: https://www.youtube.com/watch?v=9rSBmOgpcDE)

I watched Letterkenny, and I loved it.

And here’s what I loved about it:

Without waxing lyrical, or unduly philosophical, lots of great ‘creative work’ is concerned with discovering or uncovering new means of expression. If everything has been said before, it still communicates itself in a new way.

I’ve never heard a conversation like the opening scene in Letterkenny. I’ve watched it about seven or eight times now, and it’s still great. There’s something rare about, something Charles Dickens and Wes Anderson are very good at, in the way it heightens mannerisms and idiolects, so that the actors are more caricatures than characters without coming across as false. It shows us that sometimes, we shouldn’t strive for a reflected reality, but for an authentic one. And if it’s a new reality, so much the better, so much the better for artistic opportunities.

Letterkenny is patently ridiculous, but its internal logic is unassailable. It never approaches the rhythm or language of normal conversation, despite 90% of it being, as you’d expect from a show based in a tiny Canadian village, people standing around doing much of nothing.

Letterkenny is funny, its characters are great, its plots are great, its dialogues are especially great. But more importantly, it reminded me that even something as mundane, as common, as surely-been-done-in-every-conceivable-way as a conversation, can be turned into a surreal, entertaining performance – by breaking the rules of conversation. Which sounds really simple, but in something as familiar – in our everyday experience, and in artistic depiction – as a conversation, familiarity can often obscure what the rules are. Being able to step away from the really, really ingrained rules: of behaviour, of representation, of art, of advertising, is such a useful skill, and one I need to improve on in this year of our Lord, MMXIX.

What falling flat on my arse when ice skating taught me

My Favourite Pubs in Brixton – By @danieljburkitt