“Stone Island and Ralph Lauren; that’s what we were wearing then”- Is there a place for theft in advertising? @JoeySare

While scrolling through Facebook, yet another video of a smash-and-grab store raid on a Louis Vuitton store popped up. You’ve most likely seen them: a gang on mopeds smash the storefront, grab a few leather bags, and fly off as fast as they can. And although they’ll be condoned by the media, Louis Vuitton benefit hugely from this. The media are giving LV some tremendous PR. A few key human behaviours are being played out- ‘if everyone else wants it, I should too’, and ‘if it’s expensive, it must be good.’ For Louis Vuitton, this robbery is worth every penny in lost stock.

Theft has long gone hand in hand with a brand image. For Stone Island and Ralph Lauren, their birth into wider counterculture can almost be put entirely down to the fact it was, at one time or another, stolen. I’m not saying everyone who wore the brand was a thief, but it’s presence in the culture cannot be denied.

Take the birth of stone island as an example. Its entrance into football counterculture was believed to have started when Liverpool fans stole the expensive Italian designer gear while on tour in Europe because they couldn’t get into clubs dressed in their team colours. They copied what the Italian kids were doing (called the Paninaros, somewhat like the Sloane Rangers in the West End of London; rich kids with a lot of free time enjoying the prosperity of the 80’s by buying into designer brands). For them, Stone Island became a memento of European football trips, a signifier of their undoubted elegance to their club, and, ultimately remains as a badge of absolute confidence and defiance. We are attracted to confidence. 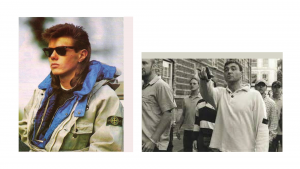 Equally, Ralph Laurens story shares an aspect of thievery its comeuppance story. In the Bronx in the early 80’s gangs of kids, the most notorious being the Lo Lifes (Lo for Polo, Ralph Laurens subsidiary brand, as well as ‘low’, insinuating their societal status as hustlers), Robbed, wore and resold the middle-class American brand into the housing projects. And although Ralph Lauren may have resented this as it could affect their public image, it proved to be one of the most advantageous things for the brand. With its association with a ‘by any means attitude’, it was fully adopted by hip-hop culture, which was beginning to explode out of the states. The Lo-lifes estimated they robbed almost $100,000 dollars’ worth of RL in the early years of booting. Not a bad price to pay to break middle America. 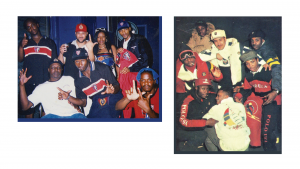 Even smaller scale ‘theft’ has a place for brands. Nike often, whether intentionally or not, have faults with their site, which allows people to get big discounts that are supposed to be for limited members. Now, although this isn’t direct theft as customers have to pay, some people will still take up any offer to exploit the big players. For all we know, Nike were planning to put this item on sale anyway, but regardless, the product sells out far quicker than just having a percentage sticker sitting on it.

What I’m saying isn’t anything new. It’s ultimately about making the customer feel smarter than you. And if that draws the customer in, we should allow it. I understand a lot of people won’t agree with me when I say theft can be a big player in your PR, but if you’re disgusted by it, consider what you do when you consistently tell people to aspire to one day owning a piece of your brand. If your message is to let everyone know that you need it but can’t buy it, don’t be surprised when people use other means. It’s going to happen. For some people, they might see it as getting even.

A Morning with Steve Harrison 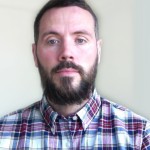