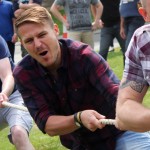 Earlier this year I went to an old friend’s birthday party.

I approached the DJ with the request to play Rock The Casbah by The Clash. He gave me a puzzled look. “Are you…myth?”

I tried for a moment to grasp his apparently syntactically suspect line of questioning.

Then it struck me. The DJ was an old housemate of the birthday boy. Years ago the household had taken to referring to me as “Myth”. Some even saved my name in their phone as “Myth”.

Not because of my strident masculinity or outstanding prowess in a particular field.

Rather, I think it was because I had a reputation for being a bit unknowable. Maybe a tad mercurial.  Or even aloof.

It wasn’t always this way, but at that time of my life it was.

Cut to the present day, a month into my SCA experience.

At this point I feel I might be a bit of a “myth” to some people, an unknown quantity. Which I’m not entirely happy about.

Our job, after all, is to communicate, not obfuscate.

On Friday we presented our reflection slides. Whilst presenting mine to the class, I just froze up mid sentence and petered out. How embarrassing.

At this point of the SCAB, I want to break off from the point I’m trying to make and mention something. The piece might suffer as a result and it might not be relevant. But sod it.

What I wanted to say was that after I presented, three people sought me out to tell me they enjoyed my slides. Because they’re just nice people.

And it assuaged the mortifying embarrassment at least a tad.

Stephen walked past and told me he enjoyed the slides. I didn’t hear him initially, so mumbled “Hmmm” and shuffled off. Sorry Stephen!

Sam gave me kudos for mentioning David Lynch. We talked about how Mulholland Drive captures the subtext of LA perfectly.

And Eytan came up to my when I was alone and gave me some lovely words of reassurance. He even gave me a hug! It was a good hug.

Back to the point I was trying to make.

It occurred to me after presenting that I was nervous about fully expressing myself. Not just during our weekly slides, but in general.

I don’t think I’ve found my role yet.

Ultimately, why am I here?

Well, for a start, I have always wanted to be an advertising creative.

But specifically, I’m here because I’m going to learn to be a great advertising creative. I’m going to graduate with a great portfolio. I’m going to get a great placement, I’ll get a job at an agency I admire and respect.

These are all real, tangible things. Not mysteries, ifs, buts, maybes.

I’m going to find my role, and not be a mystery.

Just don’t nickname me “Reality”, as that would be ridiculous.

Not finding a partner in this year’s cohort. – By @G_Medford