Was it the right time to come up? By @PavouxAlison

Was it the right time to come up?

I wonder how my life would it be if I had been born to a different time period. If I could travel through times, where would I go? I actually have no idea.

I think I would first go back to year 0 and find out what was going on at this period, I would try to understand peoples and religions. I would meet the person who said “It will be the year 0, and life is going to run around 12 months, 52 weeks and 365 days.” I would figure out how humans have created religion’s stories we are still believing in. Actually, I struggle to understand religions. I was born into a catholic family, they baptized me when I wasn’t even 1, I think it’s not fair, I had no choice. I’m not into religion anymore anyway, it kind of scares me to look at a crowd holding each other hands and saying the same things all together. I confess I have to go once a year, for Christmas of course. Familial tradition, I don’t believe it though. Religions are so complicated, they can bring help when life sucks as they can make life sucks. I wonder whether people were aware how huge it was going to be.

I wouldn’t stay too long into this period.

My second wish would be the sixties then I would have been a teenager during the seventies and eighties. I’m pretty sure it have been one of the funniest period, and it not going to be the same ever. Peoples style and music were just amazing, beside I think best parties are eighties remake. There were no phone, no laptop, people used to speak to each other. You had to be creative to flirt with a girl/boy, it looks cool.

However, I can’t complain I was born in the nineties, our life’s comfort is so much higher than what our parents got. I shouldn’t say that though. There are actually three factors I have to considerate. The first one is the period, the second one is the place, and the third is the family you will get in. I don’t know which one have the biggest impact on your life though. If one factor is missing it’s going to be sucks anyway. I can choose to born in Florida in 2010, looks nice, but not that much if my mother is a crazy drug addict, beating myself since I’m born. Or I can choose to born in France in the best family ever, but it gets hard if you are in 1914.

I think lucky are whom who gets three goods factors in the lottery of where, when and into which family they are born. I think I’m pretty lucky, I feel guilty sometimes. Then I thought about it and I realized that these factors are the keys of luck but not necessarily of happiness, even if it helps. I don’t believe in a world where everybody live in happiness and peace anyway. I think people are sucks and need to see sadness around them to feel happy and lucky.

Friday won’t be my favourite “f word” anymore and I can’t f*cking wait. By @iamvandale 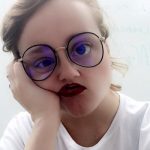 Chocolate Eggs a Week After Easter – By @UntiedEye