Christian: March for giants is my favorite, due to the scale of it. OR barncancer fonden with their train DOOH, I wish I made that.

Jem: Today I saw a Pepsi can stuck in the bit between the up and down escalators at Oxford Circus tube station. It was spinning and making a funny noise and everyone who went past looked at it. It was better than Kendall Jenner.

Helena: The British Airways “Look Up”, that’s one I wished I made. Especially cause it’s not in your face technology.

Poppy: ‘Oops’ by o2 was super simple. Loved it.

Rachel: Have a smooth Valentines day for Wilkinson Sword.

Joe: Not generally a fan of OOH, but loved the spotify campaign. Music plays such an integral part to communities, and just loved the use of data.

Adeline: Xbox Survival billboard, from McCann. Also the only thing that made terms and conditions cool as a poster. And made me read more than 800 words in an ad.

Helena: The Bruised Woman by WCRS.

Steve: This for ANAR Foundation from Grey Spain:

Martin: The adidas sponsored playground next to my house in brixton. Not a classic OOH ad, but it still is a very relevant place to put the brand.

Meg: Kitkat have a break… the half finished board

Dan: There was this condom campaign that drew condoms on graffitied knobs 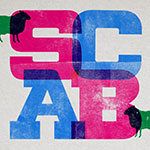