Revealing a Secret – By @joeyfraser95 It isn’t really a secret anymore.

I gave it away yesterday.

And even then, it wasn’t a secret.

The truth is, I was able to go to SCA because I was saving up for a world trip and I turned it down. And every now and then I think about it. I think about how, right now, I could be on a beach in Vietnam. Or how about a train in Siberia? Or maybe on a safari in Western Africa.

I think about it a lot.

But not with any regret.

Yes, I could have gone on this life-changing trip. But how much of my life would have changed with it? Sure, I could have some amazing stories to tell and a great collection of photos. Maybe a few mates in different countries that I could be pen pals with and rely on to crash on their couch if I ever went back there.

That would be cool.

However, if I really think about, what life would I have come back to in London? I wouldn’t have stayed abroad, I wouldn’t have been able to, so I would have had to return. And what would be waiting? Maybe a graduate job in a marketing agency as admin if I pushed it. More likely, a job in finance that I could use a contact to maybe get.

There’s a lot of maybes here.

I’m not the most decisive person. Sometimes, I have second thoughts on a campaign, and sometimes I don’t trust myself to tackle a brief properly. But coming to SCA has made a lot of things certain going forward in my life.

I’m going to be making ads. And I’m going to be making ads with a top partner for that matter. And if I’m not travelling the world, maybe some of the ideas we can come up with can at least change it. Marc always says that one big idea can change the world. I feel that’s true. The craziness of it is how someone can one day sit up and think it. It will be a while before I get to the level of world-changing ideas. I’ve come to accept that.

The madness of SCA has weirdly settled me.

Back when I did set design/construction I would get so frustrated at the time and detail that would go into creating a stage set. For example, we constructed a sea wall for a play that would be swung on and jumped on and hit and spat on and all the things the teenagers in the play would do to it. It had to be built to a tee. We spent ages finding the right kind of plywood that would bend to make the right curve of the wall and we spent an eternity painting it.

I won’t go into how much detail it took but it was an eye-opener to me just how the smallest detail counts. And it used to frustrate me. And I used to think ‘nah, no one notices this kind of detail’.

But they really do.

One little change to a line or to a bit of craft can shift someone’s perception of it. We rearranged our Red Bull campaign in our book, and now people seem to enjoy it more.

This, and loads of other techniques and truths, I really learned to appreciate at SCA. I wouldn’t have discovered this on a beach somewhere in South America. I would’ve just continued to live and think like I used to. The year has been tough. I would have been more comfortable travelling. But being comfortable doesn’t always help you grow. Or develop.

Travelling would have been nice, but now I have a life and career I’m actually going to enjoy ahead of me. And all it cost me was stroking a heavily sedated tiger in India and getting some likes on my Insta.

It’s what’s on the inside that counts – by @AshJBibby 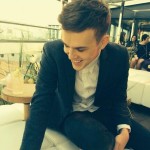