I’ve found that people find it strange when I am pretending to give a speech while walking along. So I’ve taken to just holding a phone up to my head.

It’s these times when I come up with the best ideas.

That and also this new thing I’m doing of lying down anywhere and trying to only think of the idea. But yesterday it went too far and I ended up in the state of being aware but no being able to move.

As I said in one of my scholarship entries, the space where you think is really important.

Jesus escaped the cave he got put in because he had three days in a no-distraction place to think about getting out.That’s why I don’t like owning things.

Because they are just another thing to think about.

All you need is a bed, a computer, a phone (looking forward to when the latter two are just augmented on the body), some clothes, toiletries and decent shelter.

But people have to add more. Go into someone’s bathroom and instead of two in one shampoo conditioner, they have Judie Dench Shampoo, Purple hair conditioner, a million and one face creams and more shades of makeup than Adobe’s color space.

Why do you need a gold cat that waves its paw?

Why do you need so many clothes?

Why do you need so many mirrors? Here’s a quick one: take a picture of your face, zoom into the bits you need to work on.

There are loads of these.

And the more time you spend thinking about what color skirt you’re about the buy, and which conditioner you’re gonna use, the less time you’ll have to think about better things.

Up to a point, I do understand having things you don’t need, it’s more that I reckon that less rubbish in the way helps you get on with more important things.

There are two major bits of my day that could be considered fairly useless. One is when I collect the day’s’ junk mail and read it on the bog. And the other is my daily panel-show/documentary/random list of programs I watch.

But they even give me ideas and good talking points. I’ve also got loads of origami Dominos ad boats which are better decoration in the loo than the classic lighthouse picture that was there.

That’s a thing too: why does everyone have a lighthouse/fish picture in the bathroom.

And why the famous Italian painting. Put something useful up.

I change my WiFi password to things I can’t spell yet: Hawaiian, because1, tomorrow etc.

I told someone once that I think that having nothing but my piano helps me to think. And they said they’re a bit scared of that.

You have to be comfortable with yourself when you have no distractions.

I remember when I was on a trip to study fossils, a man was saying to me that I’m fairly mad to be with. I said, “you’re with me for an hour each day, I’m with me 24/7”. And I’m quite happy.

But then that’s sort of missing the most important part of coming up with ideas. And that’s other people. They’re often who you make them for, as I’m sure as f**k there’s no one like me that I’m pitching too.

Flavia in London – By @FlaviaVentura2

How am I here? – By @gnomeegnome

Advice for Term One – By @alexbottner_ 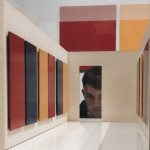