An afternoon at AMV By @petranandersson

An afternoon at AMV

Last Friday, we went to show our work to Jeremy Tribe and Prabhu Wignarajah at AMV. Each team had been working for three weeks on three different briefs. The end result was influenced by confusion and dramatic events, and we all knew that the work had suffered. None of us felt good about ourselves when we walked into that meeting room that was charged with uncertainty and nervousness.

Jeremy and Prabhu looked thoroughly through the work we presented, while we were drifting around the room and tried not to be in their way. They told us why it didn’t work and why and spotted a few ideas that had something interesting in them. Everyone knew that there were many more faults than rights, and no one was pleased with the outcome. Jeremy and Prabhu finished it off, and just before they went out of the room they told us exactly how it was – the poor quality of work, how we failed to live up to their expectations and how we did compared to other ad schools.

The room became quiet as they shut the door behind them. Some of us were taken aback by their honesty. I felt ashamed and embarrassed – we have some amazing talent on the course – and also scared. Because I expected to be way ahead of where I now find myself, halfway through the course. What if the penny never drops, regardless of all the work I put into it?

But most of all, I felt grateful. I don’t know that many people who can look you in the eye and tell you exactly what they think. Most people would probably have said thank you and goodbye, and then turned to each other and said ‘well that was a bit of a shit show, wasn’t it?’ the minute they shut the door. I really appreciated their honesty. Jeremy and Prabhu’s criticism was thorough and fair all the way through. They also got me thinking of my old riding teacher.

I started riding for her when I was 14. She had a wide reputation about being so strict that she’d had to quit several jobs. I’d also heard rumours of how she sometimes was so harsh that she had to finish early because all her pupils were crying and wanted to quit. I was terrified as I put my foot in the stirrup. She turned out to be one of the best teachers I ever had. Nothing slipped her eye. Every little movement or adjustment was filtered through her x-ray eyes. ‘Drop your heels,’ ‘outer rein, outer rein!’, ‘drop the heels’, ‘half halt’, ‘more legs, more legs’, ‘DROP THE HEELS PETRA!’. The shouting never stopped during my first lesson. I remember watching her raise the bar several inches higher than I ever jumped before. But it felt less scary to give it ago than to tell her.

It took me about three lessons to realise that ‘hmpf’ meant that I was doing something right. 6 months later she said ‘good’ between clenched teeth. I had to ask my friends afterwards if I’ve heard right. 1 year after I started riding for her I almost fell off my horse when I heard a high-pitched sound. It turned out to be her laugh. During the two years that I was riding for her, I evolved in a way that I never thought was possible. I could feel myself getting better for each lesson. My dad even gave me a talk about how to deal with losing momentum because it’s insane to evolve at such a fast pace.

Last Friday I saw a flicker of my old riding teacher in Jeremy and Prabhu’s eyes. But to be fair, she would probably not even dignified us with a word if she was the CD in the

room. I felt ashamed, disappointed and scared – but also energise because I know that I thrive most in an environment where all of my decisions are met with constructive criticism and honesty.

Now I just have to get back on the horse, write more strategy, do more research and hopefully get an ‘hmpf’ in return next time I come in to show my work.

The Ideas Bit – By @laurenpeters123

‘Quantity over quality’ by @FlaviaVentura2 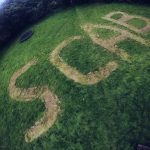